CAN SCIENCE AND RELIGION CO-EXIST? OF COURSE THEY CAN!!!!

GOD THE ALMIGHTY ASTROPHYSICIST, SCIENTIST, PHYSICIST,  BIOETHICIST, BIOLOGIST, PHARMACIST, BIBLICIST, HISTORICIST, GENETICIST, etc., etc., etc.,   THOUGHT UP THE IDEA OF CREATING NINE PLANETS AND GIVE ONE TO US, ONE TO PLACE HIS MOST PRIZED POSSESSIONS – HUMANS – THAT WERE MADE IN HIS LIKENESS.

The quote in Genesis that God created the universe in 6 days is a metaphor, God doesn’t work in our timing.  For God there is no present, past or future. He lives in the ever present time. (Read more below)

There are many christian scientists that believe in God and one of them is Georges Lemaitre (17 July 1894 – 20 June 1966) who was a Belgian catholic priest, astronomer and professor of physics at the Catholic University of Leuven. What Georges Lemaitre explains scientifically is compatible with the big bang and how God created the universe!!!!! He also discussed this with Albert Einstein.

How can we say we believe in the almighty, omnipotent God when we don’t give Him credit for creation? “Science without religion is lame; religion without science is blind.” —Albert Einstein

Science explains the how? where? when? But it cannot explain the Why?????

Yet scientists may be just as likely to believe in God as other people, according to surveys. Some of history’s greatest scientific minds, including Albert Einstein, were convinced there is intelligent life behind the universe. Today many scientists say there is no conflict between their faith and their work.One would be hard pressed to find a legitimate scientist today who does not believe in evolution. But what if evolution is God’s tool? “Methodical research in all branches of knowledge, provided it is carried out in a truly scientific manner and does not override moral laws, can never conflict with the faith, because the things of the world and the things of the faith derive from the same God. The humble and persevering investigator of the secrets of nature is being led, as it were, by the hand of God in spite of himself, for it is God, the conserver of all things, who made them what they are” (CCC 159). The Catholic Church has no fear of science or scientific discovery. (CATECHISM OF THE CATHOLIC CHURCH)

God is the intelligent designer behind it all

SCIENCE AND RELIGION CAN COEXIST. THEY COMPLEMENT ONE ANOTHER.

Science answers the what and how, while religion answers the why. Science all started with God. God created the heavens and the earth etc….(Gen1:1) God is the intelligent designer behind it all. What Georges Lemaitre explains scientifically is compatible with the big bang and how God created the universe!!!!! 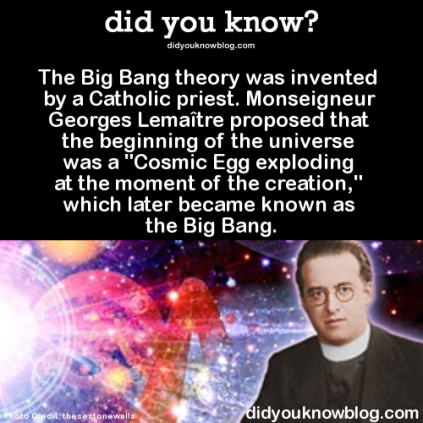